Lilli Rusk on Being a Housewife and Yogini 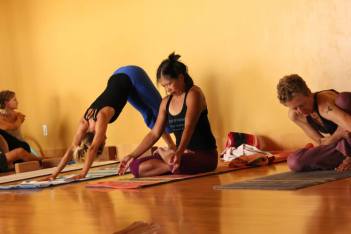 I’ve known Lilli for a few years because we practice Mysore style Ashtanga yoga in the same room. We joke that her back’s made of wood and mine’s made of steel; we don’t easily bend. Solidarity breeds friendship. I’ve always wanted to know more about how she structures her life in such a way that allows consistency and dedication. She always shows up and she never makes excuses. We can’t chitchat about it in class because… it’s class.

How did you find Ashtanga yoga?

I was living in Austin and, at the time, I was playing golf and tennis. One of the girls was an Iyengar teacher and they had yoga at our country club. So I started out doing country club yoga. You know, where all the ritzy-titzy people take yoga. Then I started taking different classes at a big studio in Austin called Yoga Yoga. It was there I found Ashtanga. I took led classes because that was all they offered. I only did led classes for many, many years.

How did you come to accept Tim [Miller] as your guru?

We moved around a lot (me and my husband, Paul.) We moved for his work. So I’ve had different teachers all over the place. We were in Austin, then Arkansas. It was there I found Louise Ellis. She was a certified Ashtanga teacher in Arkansas. She also only taught led classes. So I would drive 1 hour 10 minutes to practice with her.

Then Paul and I moved back to Austin. And then back to Arkansas. But by then Louise wasn’t there anymore. So a group of friends and I just got organized and started practicing together. Like Mysore, but with no teacher. I didn’t have a teacher for many years. 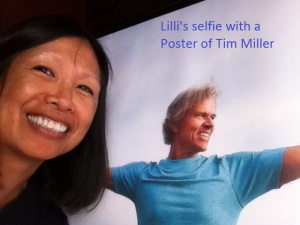 Then we moved back to California and were living in Irvine. But soon after we got transferred to Australia. When we moved back, our lease was up in Irvine and Paul said, “Where do you want to live now?” So I said, “Let’s move down to Encinitas so I can practice with Tim.”

Had you even met Tim before?

I took a workshop with him in Austin many years ago, once. When I was living in Irvine, I was mostly taking classes with Diana in Dana Point. But one day I decided to drive all the way down here to take a class with him. And, you know, I felt a connection with him. Now I’ve been practicing with him for 3 years.

You wake up early every day for Pranayama. What are your mornings like?

We set the alarm for 4:15am. We get up, make coffee (espresso.) It’s always worth it to get up. Sometimes in pranayama, like today, it seems like Tim’s holding the breaths extra extra long. I get tingly, feel like I’m gonna pass out, topple over…

Oh yeah, I cheat. Oh geez! I cheat. Inhale retentions I’m pretty good at. But I usually have to cheat during the exhales because it just takes so long. But I’m learning. I’m practicing. I figure Tim’s been doing it for 30something years. I’ve only been doing it for like half a year. So I still have time to learn.

(laughs) Very boring! We’ll start eating probably 7 or 7:30. On Mondays I work the check-in desk so I don’t get home until 7:30. Paul will already have something ready for us to eat. We try to eat early because by 9 or 9:30 we’re tired. If it’s 8:15 and we’re watching tv in the living room, I’ll fall asleep. And I’ll just wake up enough to move to the bedroom to go to sleep.

What’s the longest stint you’ve ever lived in one place?

Five years is the longest stint. Paul was working at Oracle and Sun Microsystems and was always being transferred. When we left Austin, we decided we’re not going to buy a house until we figure out where we want to retire. I think we might end up retiring in Hawaii. I’ve got family on Oahu but he likes the Big Island and Maui. 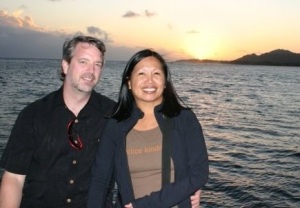 You make new friends each time you move. How do you pull that off?

It was really easy to make friends when I played tennis or golf. I’d join a country club and start playing and meeting people. It was really easy to forge friendships. But I stopped those activities because of injuries. And it’s harder to meet friends through yoga because everybody’s quiet and in their own little world. They wanna come in, do their thing and leave. Arkansas was easy because it was a small group that knew each other. We would just practice and not talk very much and everyone had their own lives. And I drove an hour and 10 minutes so I didn’t want to sit around and chitchat. When I first moved here [to Encinitas], I was more extroverted in order to meet people. It was pretty easy. Paul has a home office so he can’t meet people easily. Most of the people that we know here are through yoga.

What are your other hobbies besides yoga?

Ya know, yoga is it. I walk a lot, I do travel. I visit family a lot because I don’t work and it’s easy for me to fly up to the Bay Area. There’s always something going on there- family parties. Or my mom who lives in Reno- it’s easy to get on a flight to visit her. And I read. And there’s all the stuff I do at home. Like I take care of the finances and billing. Then Paul doesn’t have to do any of that. Typical housewife (laughs.) He has a full time job so I’m the cleaner of the house. Then when he’s not working, it can be just fun for us.

How is your life different than what you envisioned in your 20s?

I didn’t think I’d move around as much as I did. I thought I’d always live in San Francisco. I didn’t go to college. I went straight to work as a travel agent. And that’s how I met Paul- I was his travel agent. He traveled Monday-Friday and I made his travel arrangements. Then on the weekend, he wouldn’t have to do anything because I’d take care of the house. I worked when we first moved in together.

For our whole dating life and up until like 3 years ago, that’s how he traveled: Monday-Friday. So when he’d come home on the weekend, everything was done in the house and he wouldn’t have to worry about anything. When we moved to australia for 9 months, he didn’t have to travel. So we were with each other pretty much 24/7 and I said to him, “Do you think we’ll still like each other? We’re so used to being apart.” We would just have Honeymoon weekends together where we’d cram in all this fun stuff. I said, “I’m afraid we’re not gonna like each other.” But we got used to being together all the time and now it’s nice that he’s home. We eat lunch together everyday.

On your Facebook page there are lots of photos of you with kids. Why didn’t you have any of your own? 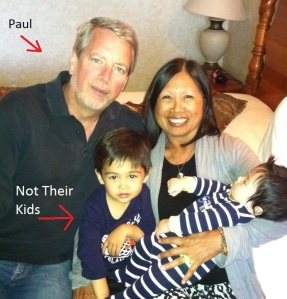 Paul and I met later. I was 29 when we started dating. We lived together for several years and, when we got married, we didn’t think we wanted to have kids. But then all of a sudden I started thinking I want kids. So then we were trying, but it was too late. I had one miscarriage. Probably because it was during a move. We were leaving Austin and going to Arkansas the first time. After that, I was probably 35 or 36, and I thought, “We’re probably the best aunt and uncle for all our nieces and nephews so it’s ok.”

Paul’s a white guy. Has that ever been an issue? (Lilli’s Filipino.)

I don’t think so. When we first met and were dating, he sent pictures of the two of us to his parents. They thought I was Indian. (laughs.) His family is pretty Midwestern. When we go to his big family reunion I’m really the only person of color. One of his cousins has a stepdaughter that’s mixed-race. And another cousin adopted a little boy from Korea. They were showing me the pictures and they said, “Look at our grandson. We’ve doubled the Asian population of the family reunion!”

← Aline Marie on Making Deliberate Choices for Life, Love and Happiness
“First Day of my Life” Video from Bright Eyes is Empathy 101 →
Follow People We Know on WordPress.com