Rachel was raised in Greenwich Village by artistic parents. She excelled as a competitive runner in high school and the natural setting of the Cross Country running season inspired her to attend the University of Vermont (BS in Environmental Science.) It was during college that a friend introduced her to the practice of yoga and she became hooked on its noncompetitive, nonjudgmental nature.

Throughout her twenties, Rachel led youth groups on backpacking trips and trail building projects in National Parks all over the US. She worked on organic farms in Europe and spent months touring by bicycle. Between travels, Rachel was a kindergarten teacher and high school track coach in New York City. All the while, she was exploring yoga and refining her own practice.

Rachel relocated to California and completed an Ashtanga teacher training at It’s Yoga in San Francisco in 2003.  After a several years teaching yoga in Bay Area public high schools, Rachel moved south to Encinitas and started teaching adults. She completed the Anusara Immersions and Teacher Training with Michael Fukumura in 2009.  Rachel now practices at the Ashtanga Yoga Center (AYC) where she is humbled by the dedication required to sustain a daily practice.  She completed Primary Series teacher training with Tim Miller in 2014 and Second Series teacher training in 2016. She has been assisting Tim Miller and teaching at AYC since 2014. 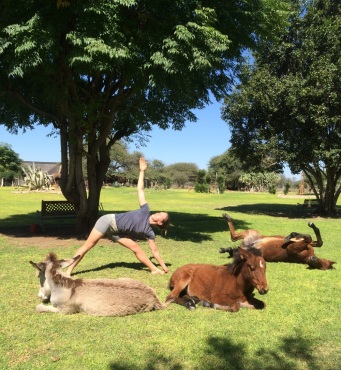 Rachel loves watching her students gain confidence and become more comfortable in their bodies. Poses that were once “impossible” become routine when approached from a place of play, surrender, and alignment. Her classes are both challenging and welcoming to all levels.

In addition to teaching yoga, Rachel has the exciting role of dog-walker and pet-sitter. Though she tries to practice non-attachment, her furry friends are the one thing on earth she couldn’t live without. She also enjoys studying West African dance, playing guitar and singing, and has traveled yearly to South Africa, Tanzania and Namibia to volunteer in wildlife sanctuaries.

WHY THIS THIS BLOG NAME?

I started People We Know when I realized that we’re often inconsiderate of strangers (think road rage or online bullying.) The BIG goal is to find value in random interactions, and create more empathy and peace in our dealings with other humans. 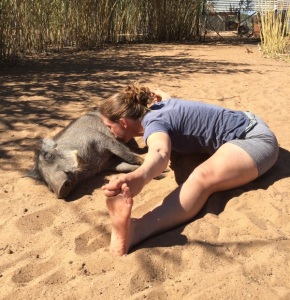 I’m in yoga classes (taking or teaching) for 2-4 hours every day. But because yoga is a quiet and introspective activity, our “Friends from Yoga Class” often have entire lives about which we know nothing. In this blog, I interviewed yogis about their life choices, passions and struggles. Maybe we can learn something or be entertained. Either way, we get to know the people who show up in our path.

Here’s a quote from Alexander McCall Smith that says it well. Click here to read the full excerpt.

… Each of us, even the least of us, has a rich hinterland of value behind us: the lives we have led, the thoughts we have had, the love we have given and received- the little things of our lives that may not mean much to others unless and until they are granted insight… To see another as a soul is to acknowledge the magnificent, epic course that life is for each of us, and to experience sympathy for the other in his or her negotiation of that course.